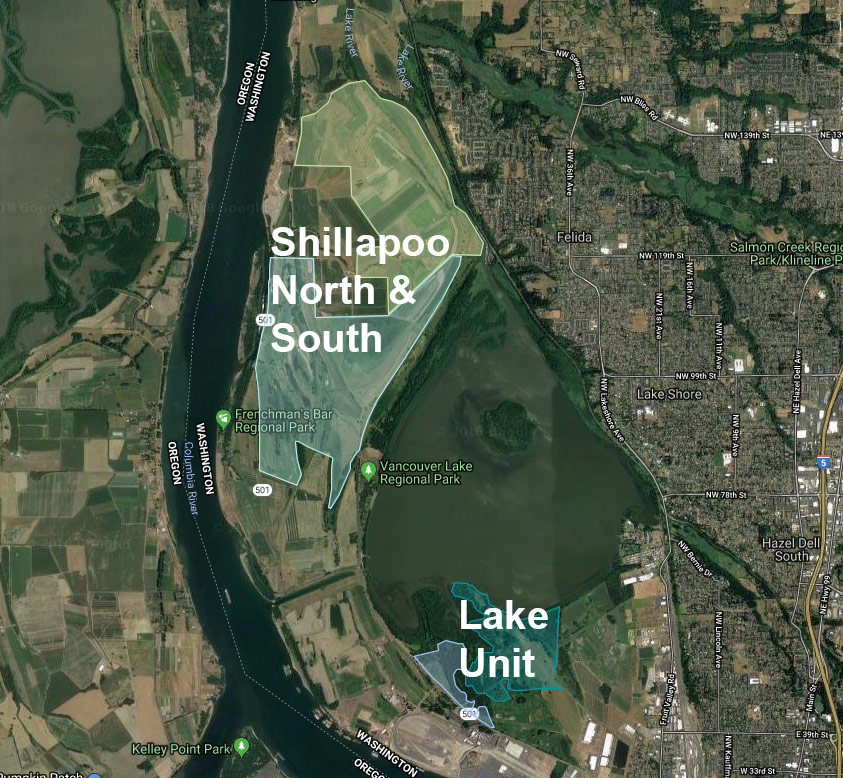 These overlays were created using maps from the Washington Department of Fish and Wildlife website maps, which are not particularly detailed. Don’t expect these to be spot-on accurate and pay attention to signs. There is a link to an interactive version of the map below.

Shillapoo Wildlife Area is a 2,300+ acre wildlife area just west of Vancouver, WA and is easily accessed by road. During the hunting seasons, it is shared by duck, goose, and pheasant hunters, along with bow hunters for deer.

I’ve created a Google map from the maps provided by the Washington Department of Fish and Wildlife’s Shillapoo website. You can click on the map screenshot above or on the link below. It’s as good as I can make it based on the low detail maps they’ve provided. Just remember to respect any posted signs. I’ve added a few landmarks from the information below but have deliberately omitted specific hunting spots, blinds, etc. Some of these spots were passed on to me by friends and some I’ve discovered on my own; no hunter is inclined to give away everything. But you’re smart and should be able to zoom in on the map and find blinds and possible hunting spots for yourself. My goal is to get you enough information so you can make it out here, have a good hunt and avoid some of the pitfalls. Good luck! This shelter next to the Lake Unit main parking area is a great spot to shoot trap when it’s not duck or pheasant season.

The lake unit can be found on the southern end of Lake Vancouver and is a good spot to put in a small boat, hunt from the shore, or depending on the season, in small ponds in the area.

A Discovery Pass is required. The easiest access to the Lake Unit is via La Framboise Road off Fruit Valley Road. The gate is opened sometime around 4 a.m., or whenever the guys paid to open it get there.

I’ve not accessed the Southeast side which borders NW Lower River Road, but it appears that you should be able to park along the road and walk in to areas here. However, there are many “No Hunting” signs posted in this area.

From the main parking lot(marked on the map) you can head south to a large pond with a permanent blind. This can be filled with very sticky mud so don’t go alone and bring a dog for retrievals.

From the gravel lot(marked on the map) near the lake, you can strike out along the shore and pick a good spot on the shoreline for hunting with decoys. Lakefront hunting can be good depending on the wind. Keep your decoys close to shore. It’s generally pretty shallow and not too muddy, so you can get by without a dog provided you keep the birds close to shore.

From the gravel lot you can also walk along a gated dirt road northwest to a handicap-prefered area (there are signs here) and blind (marked on the map), which also provides hunting from the shore. If you are not handicapped, then respect those who are and move if they want to hunt this blind here. Late in the season, this road also gives you access to small flooded ponds in the timber to the Southwest of the road. Again, beware of mud and don’t head out alone!

If you have a small boat, you can put in here, although it’s very shallow, especially early in the season. For a fee you can put in at the deeper (and safer) Felida Moorage for access to the Northern shorelines of the lake.

Along La Framboise Road there are a couple of fields. I’ve set for geese here in the past, but have only gotten some shots at honkers flying low from the river towards the non-hunting land to the east.

From late September to the end of November watch out for pheasant hunters stomping around out here. You can hear them before you see them and they generally don’t see you until they are pretty close.

The rest of the time you will see a variety of characters out here, often parked, and sometimes with their cars, vans, or RVs tucked into the woods near the boat launch. I’ve known people to have their cars broken into here, so take anything you really want with you.

Shillapoo North and South are the lowlands, wetlands, and fields to the Northwest of the lake. These areas provide duck hunting in ponds with decoys, goose field hunting, jump shooting in sloughs and backwaters, and flooded field hunting. It’s a large area and is divided into North and South units.

This area is mostly wetland with ponds and sloughs, although there are a few fields you can hunt.

A Discovery Pass is required.

To access the eastern side of the South Unit, take lower river road until you get to a fork. Lower River Road continues to the left. Instead, take the road that goes straight (North). There’s signage for Vancouver Lake Regional Park. Once past the park, and after you’ve crossed the bridge over the slough, just about anything to the left of the road is open to hunting. You can park in a couple of designated areas or follow the road, which has been cut to discourage street racing, to near its end to a spot we call the “shed”.

For access to the western side, continue to the left on Lower River Road until just before the entrance to Frenchman’s Bar Regional Park. There is a small pull-out (marked on the map). You can enter through the gate and follow the fence line into the unit. If you continue along Lower River Road you will find two other parking lots that provide trails and access into the unit.

Perhaps the easiest and most well-known area is at the “shed” (marked on the map), which provides an entrypoint to flooded ponds that contain a handicapped blind along with a variety of other blinds throughout this wetland. You can walk west along the dike, which eventually turns south, to access blinds or simply hide in the weeds along the dike. There are also blinds scattered among the ponds farther south of the dike. This can be a busy area, so be sure to look for other hunters as you enter.

From the “shed” you can also access the fields north of the dike, especially when they are flooded. But beware of the drainage ditches, as they have steep sides and are deep.

If you enter from the west side of the unit you will walk in using trails or dirt roads and hunt among the trees and backwaters here. I’ve not made it back here yet, but plan a few daytime excursions during the current season and will try to report on what I see.

On the east side, also beware of car break-ins and street racing on the access road. The cuts in the road don’t seem to deter all the racers.

Although its posted as illegal here, many people like to come out and shoot rifles and pistols. It’s good to keep an eye out and try to get their attention if you are concerned about stray bullets.

Finally, discourteous hunters seem to congregate in this area. I’ve seen guys sit on top of the dike, not bothering to set out decoys, and take pot shots at anything that flies over them, causing any other birds in the area to flare. Guys will also set up right on top of you along the dike unless you suggest they move a little farther away. Tim sits in a few rows of corn during an early season goose hunt at the Shillapoo North Unit.

The Shillapoo North unit is comprised mostly of fields and lowlands, some of which flood during later parts of the season, presenting more hunting opportunities.

For access to most of this property, you can walk in from parking areas on the west side (marked on the map) off Lower River Road. There is roadside parking that gives you access to a dirt road you can walk to get into the heart of the fields. Or, you can go to the end of the road, where you can park and walk a dike that borders the northern part of unit. This provides access to a variety of low areas and seasonal ponds, some with blinds. Finally, you can access some areas by boat via Lake River, which borders the area on the east side.

Some of the fields in this unit are planted with corn that is harvested near the season opener. Often, officials leave a few rows of corn standing to offer hiding spots, especially for goose season. There also are seasonal ponds, some with blinds. These are easy to spot on the map, but I encourage you to visit them during the day to determine their condition and water levels before you plan a visit in the pre-dawn hours.

I’ve not seen as many pheasant hunters in this area as the others, but beware and let then know you are there if you do see one.

Just like the South Unit, many people like to come out here to shoot rifles and pistols, even though it’s prohibited.

The parking area near the end of the road attracts overnight or multi-day campers or squatters. I’ve not had problems with them, but I’ve also seen plenty of needles and other drug paraphernalia among all the trash that is dumped here regularly. It’s truly regrettable how many people leave their junk here. Don’t leave anything you care about in your car.

Changes and Controversy at Shillapoo

A very contentious issue surrounds the Shillapoo South unit. It involves a salmon recovery effort called the Buckmire Slough Project. This project, which would vastly alter the landscape and water retention of the South Unit, is opposed by waterfowl hunters and by the Washington Waterfowl Association. This WWA newsletter details the opposition to the project.

If the project goes through, then water levels in this Unit will be open to Columbia River flows and will fluctuate throughout the season. This could lead to less habitat for waterfowl. The project intention is to create more fish habitat, but its effect is unclear, especially since engineers cannot guarantee this will be the effect because the water that’s held in the area may be too warm for Salmon.

Despite public opposition, as of 2018, I see evidence this project is moving forward. Crews already are preparing Lower River Road to be raised, which is one of the changes in the project.

As a waterfowl hunter I oppose this project and any other that limits public hunting opportunities. It’s unfortunate that waterfowl hunting, along with other hunting throughout the United States, is being pushed further into the private, and therefore privileged, realm. Hunters are a primary funding source in the conservation equation, yet are at the very bottom of the conservation food chain.