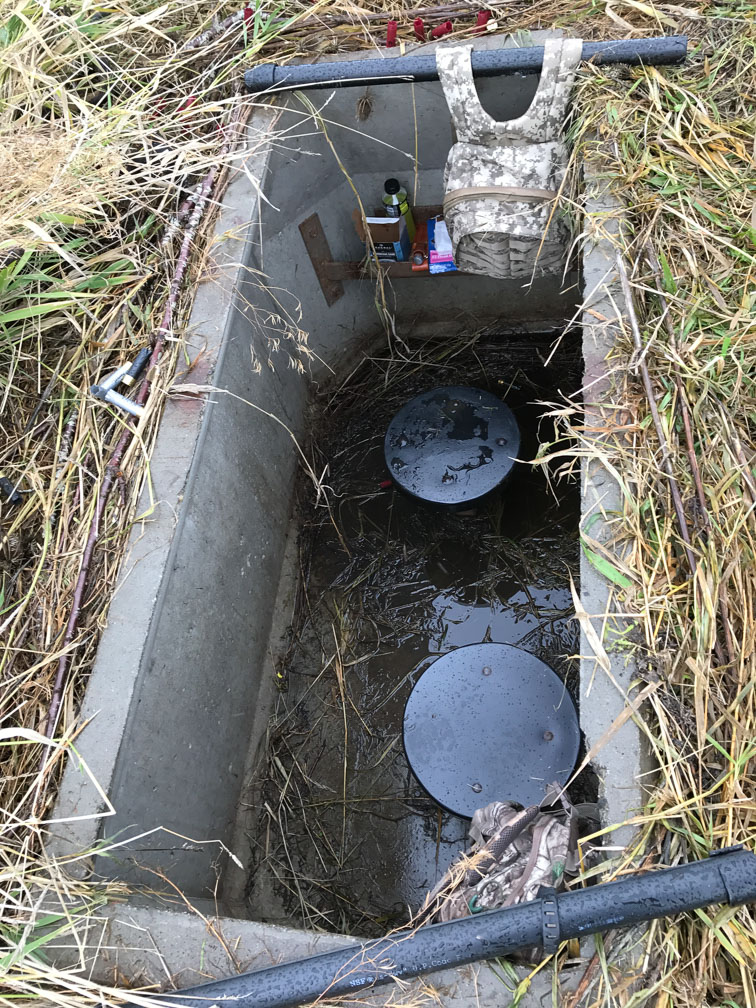 This is Blind 6. We bring sticks with us and hand our packs from them to keep them out of the muck in the bottom of the blind.

We had another productive hunt at Ridgefield National Wildlife refuge in the 2021-22 season. This time, Blind 6 gave us a good mixed bag of ducks and more lessons on good shooting during a mid-December hunt.

Choosing a Pit Blind on a Rainy Day

I’ve hunted blind 6 a few times before and even made hunting logs for my 2018 hunt and Tim’s 2015 hunt. It had been scraped at some point a few years ago and now seems to provide an attractive alternative to the bigger water Blind 5 directly to the south of it.

This day was going to feature rain squalls all day with a light wind out of the south. We had a mid-level pick at Ridgefield and knew the top blinds would be gone. So we debated whether to go for a box blind, which would keep us pretty dry or a more productive pit blind. We ended up picking blind 6, a pit, over blind 13, a box. Both appeared to be hunting OK, with 6 consistently outperforming 13. The rain doesn’t usually bother me because we dress for it.

Setting up the Decoys

The forecast was for light winds out of the south and in my experience winds need to be about 10 mph or greater before they heavily influence duck landing patterns. So we decided to create two pods of decoys to the right and left of the blind closer to the far shore. We placed two pintails in the open water in front of the blind between the pods. The white streaks on the pintails would help with visibility.

Our hope was that this set-up would push ducks travelling the north-south flyway towards the blind. This would give us quality passing shots on some and allow plenty of room for ducks to land in the spread.

This day really gave us a lot of action on a large variety of birds. We started the day by downing two pintail hens. The limit is one each, so after those birds we had to pass on at least a half dozen pintails that landed in our decoys the rest of the day, including a couple of drakes.

As the day continued we would get pairs of shovelers and widgeon bombing into our spread. We even had a flock of about seven shovelers fly right off the river and swoop into our pond, where we were able to drop a couple.

On two occasions we had small flocks of teal land in our decoys on the far side of the pond, about 50-60 yards away. We didn’t take those shots and watched as the flocks flushed away from us.

This day was on the cusp of colder weather approaching from the north and we saw a lot of evidence that some of these birds were new to the area, as they decoyed easily. It was not unlike what we say a day earlier in McNary.

Slowing Down Our Shots and Taking Turns

Our primary problems in downing ducks came from two sources. First, the guys in blind 5 were on the X and would consistently pull ducks away from us throughout the day. Second, we could not shoot well at all during the first 40 minutes of the hunt or we would have finished the day much earlier.

At some point I realized that we were not taking turns on birds, something I now feel really strongly about. I don’t know about my hunting buddies, but I get competitive and want to down a bird right away so I think I tend to squeeze too early when hunting with someone else.

So when we decided to take turns, we started dropping birds. This allows the hunter whose turn it is to slow down their shots and really get a good bead on the duck. The other hunter can be ready with a follow-up shot or with a shot at a following duck. This worked great for us once we implemented it and I can’t believe we didn’t really think of it earlier.

We ended the day with 10 ducks in the bag, 2 pintail hens, 2 widgeon, and 6 northern shovelers. We could have had more birds with better shooting in the first light of morning but once we settled down and slowed down we took much better advantage of our opportunities.

Also, Blind 6 is a great blind if you are hunting on your own or if you don’t have a dog. It’s shallow and any cripples are fairly easy to retrieve in the short grass around the blind.

Good luck out there and let me know if you hunted this blind!