Blind 9 had been brushed up pretty heavily by the end of the season and blended in nicely. You can see the guys without masks easily, so bring something to hide your face.

Blind 9 at McNary National Wildlife Refuge Fee Hunt Unit sits close to the middle of the slough in a large bay. It has a 4-man scaffold facing South Southwest. Park in Lot E, not B, for slightly easier access to the blind. Regardless, plan for a long walk, a mile or more, and bring a cart if you have one. It’s mostly flat.

This blind is good for luring ducks to large spreads of decoys, unless you have winds out of the South, which will mean birds will swing behind you (if you stay in the blind) on descent, making a tougher shot. Any other wind direction gives you good options for getting ducks into the decoys. Early in the season a large spread of at least 3-dozen would be ideal. A wind duck is good to have here, too. Later in the season, smaller sets are fine.

If there are hunters in Blind 6 (it’s almost always occupied) then you will be competing with them for birds. Some birds will follow the water and circle around the point to your West. If they are big ducks you’ll probably hear calling from Blind 6 or 5, or both. As soon as you see them give them a call and you might keep them turning East into your spread. You also will get birds that will be flying from the North that will come right over the top of you. A quick hail call right after they pass might keep them out of Blind 6. Be insistent with them! While the blind is large enough to house 4 guys, consider placing one guy off the side of the blind as a spotter to watch behind it.

The bay in front of the blind is fairly shallow out to 40 yards so if you don’t have a dog or kayak, plan your shots to drop birds into the bay. The grass behind the blind is not as tall as other blinds here so finding downed birds in it simply requires patience instead of luck.

Bring some goose floaters and you might get lucky. Every time we’ve hunted McNary we’ve seen geese, but only small groups seem to traverse the slough at reasonable shooting altitudes. You might get a chance at some strays. There’s also a flat plateau of shorter grass behind the blind that would allow you to set up some goose decoys to bring flocks in low, but you’d need to be out of the blind to get a good shot unless they were coming from the South. 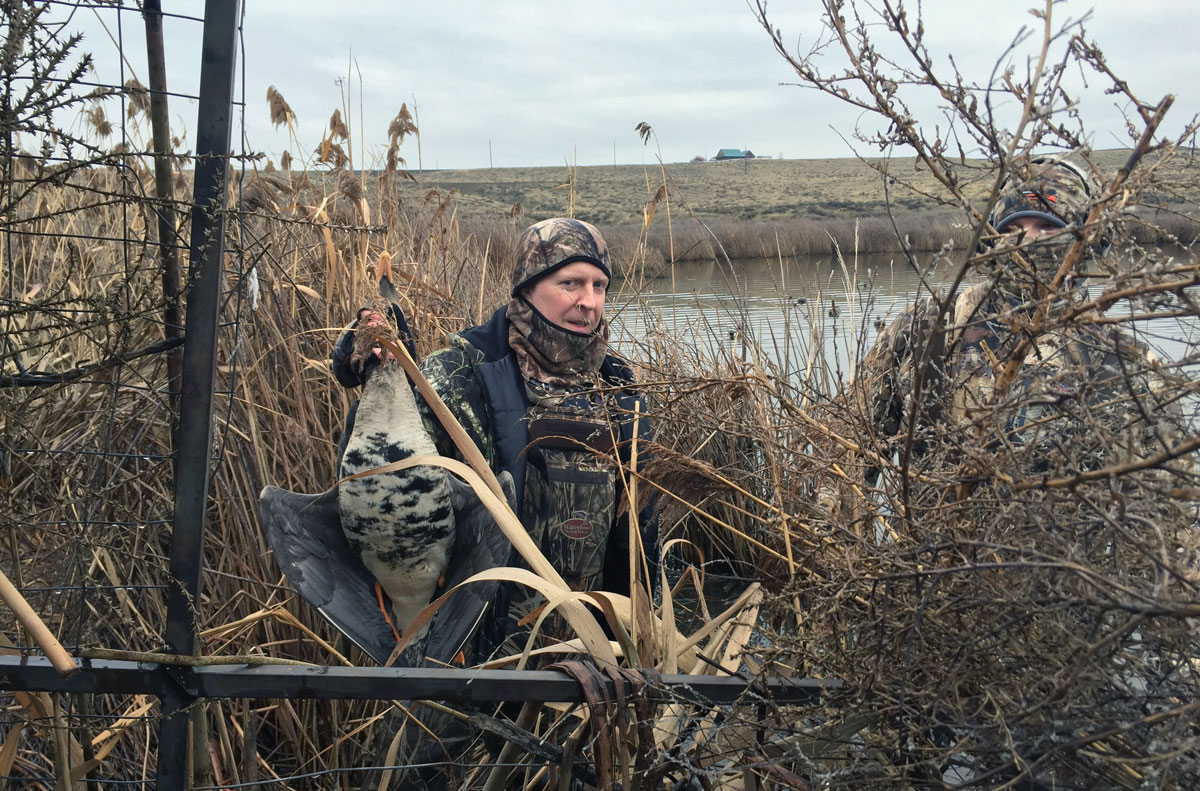 Scott paddled out from Blind 9 to retrieve this crippled Speck.

Pros: Lots of water in the bay, much of it shallow out to 40 yards; large blind; high duck traffic area; good blind if you know how to call.

Cons: Competition from Blind 6 across the bay; long walk; tough to hunt with winds out of the South.